A friend and long-time loyal blog follower recently sent me a 30-Day Song Challenge meme in the hope that I couldn’t resist taking the challenge and blogging about it. Here’s Day #5: A Song That Proves You Have Good Taste.

I think wha-ha-happnd was a figure skater competed with a song in the 2014 Winter Olympics in Sochi, Russia that I found utterly amazing. I had to have it and sent for the album from Japan at great expense which is painful now because it’s currently only $12.99 on Amazon and let’s just say I paid several multiples of that price (note to self: try to wait until the Games are over for a while before purchasing Olympics-related music). 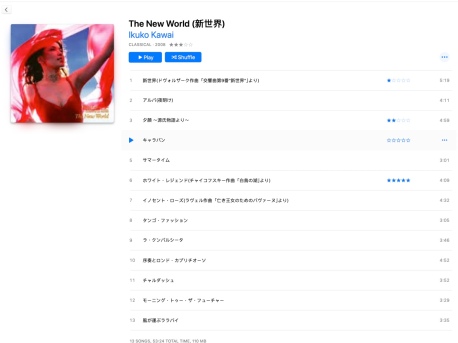 I think it was song 6 because I rated it five stars in my iTunes. I don’t rate songs in my iTunes but this was necessary because as you can see, all the song titles (and liner notes, etc.) are in Japanese and I don’t have any other way to identify which song I was so enamored of.

Apparently, Ikuko Kawai is a classical/new age violinist of note. The rest of album is beautiful, too. Since I don’t know how to search Google in Japanese, I couldn’t find a video for song 6 and a YouTube search on Ikuko’s name didn’t come up with it. The album is not available on Spotify (at least in the U.S.), either.

But here’s the well-known song Summertime which is song 5 on the album.

I also found the first song on the album which apparently is based in some way on Antonin Dvorak’s Symphony No. 9 also known as The New World Symphony, hence the name of the album, I guess. Since I can’t read the liner notes, I’ll never know. But it’s gorgeous, too.