At stake was the veracity of the list. The third person – we all know it was me, duh – was brought into it by My Daughter Cassandra who said, “I don’t think Dad will agree, either.” Here’s the 55-second video with the text of the list’s countdown to follow.

Thankfully, for veracity verifiers like myself, Billboard ended the video with their methodology which is unimpeachable. 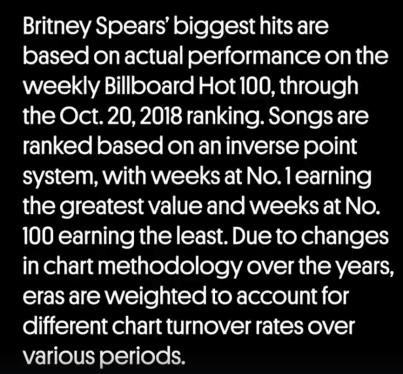 So that turned my veracity verification from “this can’t be true” to “why is this true?”

Baby One More Time needs no explanation as it’s one of the biggest, best and most important pop songs of all time.

Two songs on the Billboard list were collaborations with artists arguably bigger than Britney at the time. After a strong release (her 5th highest debut) Till the World Ends (2011) began to drop down the charts until a remix with Nicki Minaj and the song’s co-writer Ke$ha got people back into the song enough to relaunch the original version; and Scream and Shout (2012) was a track from a will.i.am album.

No disrespect intended to My Girl here – after over a decade she still had the juice for the top artists to want to work with her. But surely the star power at that time of Nicki Minaj, Ke$ha and will.i.am. played a major role in powering those songs to the top of the charts.

Womanizer. Let’s work backward here. After a four-year recording hiatus due to her well-documented personal struggles, Britney’s Blackout was the comeback album that reestablished her career. Blackout was a big hit reaching #2 on the Billboard 200 album chart[2].

But it was her following album Circus that confirmed Britney was back. Circus outsold Blackout by 70% in the U.S. and got to the #1 spot on the Billboard 200. Womanizer was the lead single from Circus and it was a massive global hit that reached #1 in eight countries. An impossibly catchy song, it was also was her first U.S. #1 since Baby One More Time.

So now that I’ve explained the why of the top five, let me turn to the question of what it should be. This isn’t the same as what my five faves are (patience – I’ll get there). Baby One More Time, Womanizer and 3 are legit. But let’s take out the two collaborations as they aren’t “pure” Britney songs. So what needs to replace them? If we go by the data, that would be:

What’s fascinating to me about this list (or Billboard’s original) is that her best results were achieved ten years or more after she began her career. How many artists can say that? Longevity in the music business is a rare achievement and such an upward trajectory in an artist’s career is even rarer. Add to that navigating the transition from teen phenom to adult star and you have legitimate reasons for Britney being a music and pop culture icon.

But what I find even more fascinating is that of the “top five”, only Baby One More Time is among the songs that most people commonly associate with Britney Spears which is what provoked the original consternation of our late-night discussion group. Songs that our group threw around (and I assume others would do the same) were from the early part of her career (in chronological order with year and peak chart position):

To me, it’s like she’s had two careers: Classic Cute Britney vs. Conquering Comeback Britney. The earlier songs were more memorable but most of the late career songs were better. The first albums were sophisticated kiddie music; the later albums were sophisticated adult music not just for the kiddies who became adults but for older adults, too. It makes me think of how we view Michael Jordan. When you say the name “Michael Jordan” what comes immediately to mind is the soaring, high-flying, hanging in the air dunk contest winning “Air Jordan”. But the older, six-time champion Jordan was the better basketball player.

Alright then. I’m finally ready. Here are my Five Favorite Britney Spears songs in order (“Is that why you were watching Britney Spears videos the other night, Dad?”)

Thanks for coming to my TED Talk.

[1] I know. You were DYING for me to list what I thought the top five should be. Be patient. My list is coming.