That’s it. I’m all in. I already have my favorite and I will resist any and all attempts by the producers, the other girls, Twitter trolls or common sense to see anyone else as the winner. Wait, what? There’s some controversy about her possibly young age?[1] Get thee behind me Satan! I will not have it! Bekah M. is My Girl, period. I even have a Daughter Seal of Approval® – “She looks like an old-time movie starlet.”

She’s also set up for us to see a lot of her. Bekah had one of the few intro packages in The Bachelor’s teaser show last month. Despite having a couple dozen other mostly unnecessary women we needed to meet, her package was repeated tonight. Bekah had a noteworthy arrival in that classic Mustang. And she got a lot of face time during the premiere.

As to Arie, I need to point out that I was not a Bachelor addict fan during his turn on The Bachelorette. Therefore, I come with no particular baggage for or against him.

With these disclaimers out of the way, here are my miscellaneous musings. 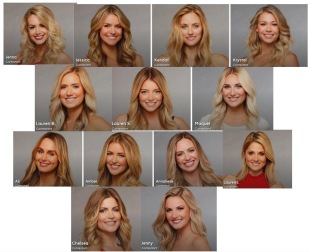 Sure, they say there are 29 women. But it’s really one playing the role of 12 others.

Last year’s Raven is better than this year’s Raven (Tia) who’s so Raven that they had a segment with both Ravens. The producers also picked a Bad Girl (Chelsea) who looks and sounds like Bad Girl Olivia from a couple seasons ago. Like Olivia did with Ben Higgins, Chelsea got a first impression rose. Typically, the girl who gets that is around to annoy us until near the end although that didn’t turn out to be the case for Olivia.

Apparently, cut-out dresses are a thing this year?

“Why have you not found love?”, Chris Harrison asks Arie proving that even the host of a match-making TV show franchise can’t avoid asking the “why are you still single?” question.

Why are there several girls every season that are shocked at how many beautiful girls there are? Have they never seen the show before?

(Girl sobbing after not getting a rose) “I took a risk and it failed miserably.” (still sobbing). Yes, dear. That’s why it’s called risk.

[1] Never shown on the show. And conspicuously absent on the website. http://abc.go.com/shows/the-bachelor/news/updates/the-bachelor-2018-season-22-women-announced

One thought on “The Bachelor Premiere – Bekah!”