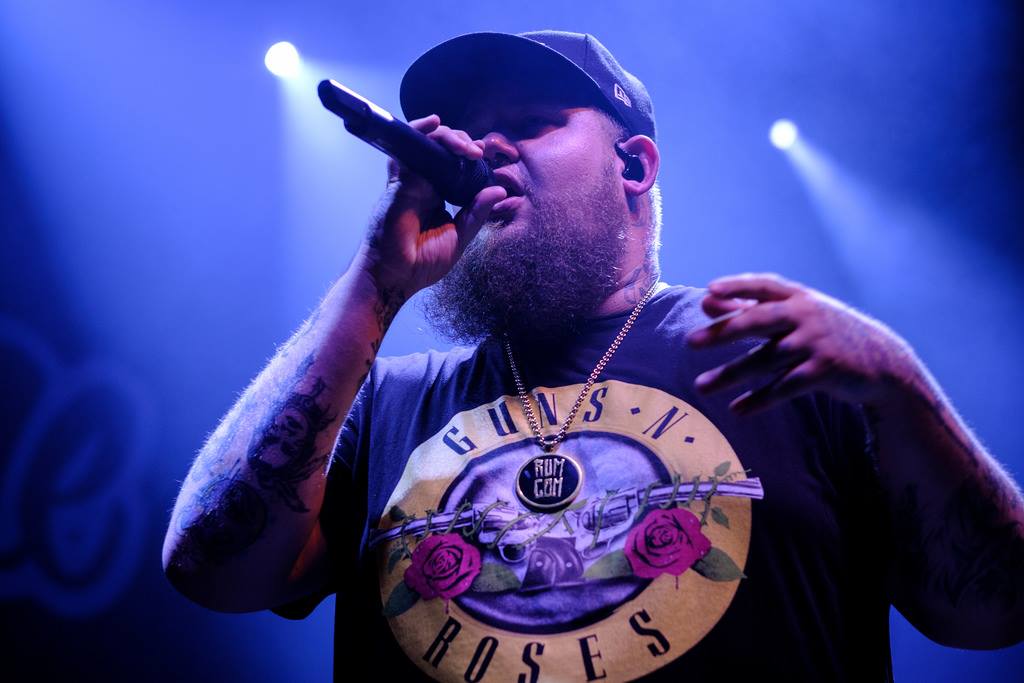 Yep, that’s who Rag‘n’Bone Man’s August 1 show at D.C.’s 9:30 Club reminded me of all night. Time and again I felt myself being transported back to Adele’s show at the 9:30 in 2011. I’m not saying that he has tens of millions of album sales or billions of YouTube views awaiting him in the future. It would be folly to predict Adele-level success for any artist early in their career even if he has followed in Adele’s footsteps as 2017’s winner of the BRITs Critics’ Choice Award given to the up and coming artist expected to have the biggest impact in the coming year. In addition to Adele, prior winners include Sam Smith, Emeli Sande, Ellie Goulding, and Florence and the Machine. Nice company to join.

But nice company though they may be, none of them are Adele. And yet I feel compelled to make the comparison.

What he and Adele both do is simply stand there and sing with a combination of power and passion that is utterly mesmerizing. Their voices can at times be tough and at times be tender with equal soulfulness. In fact, that they can do both so effortlessly makes their singing have even more impact.

Their songs are rarely stories. They are much more likely to be overflowing cauldrons of emotion. And when those emotions are combined with their remarkable vocal abilities, the effect on an audience is contagious. There were so many moments when it felt like every eye in the entire club was transfixed on the solitary being on the stage – solitary because you didn’t really notice anything else but where that incredible sound was coming from. It could have been Adele singing Set Fire to the Rain or Rag‘n’Bone Man singing Skin. In those times, not one eye looked elsewhere, not one muscle was moved, and somehow nobody even took a breath. Captivating. Hypnotic. Mesmerizing.

Crying. Both shows had lots of contagious breakouts of spontaneous tears. Combine emotional songs with raw, impassioned singing by superior vocalists and you take a quick glance at the person next to you to see if they see you trying not to cry and you notice that they’re already crying and then pretty much EVERYBODY is crying. Including the singers themselves. Crying was a distinctive feature of both shows such that people – complete strangers, mind you – were talking to each other about how many times they cried as they were exiting the club.

Both artists have that one big, upbeat song that everybody is waiting for. As he was singing his international smash hit Human, I recall looking at the crowd reaction and thinking this was like when Adele sang Rolling in the Deep.

Both of them seemed struck and surprised by the level of adulation they were receiving so early in their careers as if they’re surprised that somebody enjoys what they’re doing as much as they enjoy doing it.

A pleasant surprise for me from Rag‘n’Bone Man was both the length and pacing of his show. Most new artists only have material from their debut album to draw from in concert although they may supplement their set with a few cover songs. However, he’s released five EPs independently. So where Adele had two albums behind her for her 16-song set in 2011, Rag‘n’Bone Man was able to do 17 songs by performing some of his earlier material (sometimes with different arrangements, which I know because I have all that old stuff). Moreover, it felt like a show by a more experienced act with a well thought out sequencing of songs that ebbed and flowed with intensity, energy, emotion and pace.

That I found it hard to separate my thoughts about this Rag‘n’Bone Man concert from Adele’s shows the level of regard that I have for him. I try very hard to avoid the immediacy bias of that-was-the-best-concert-ever that comes with the afterglow of a great show. I’ll never make a list of my favorite concerts. But this Rag‘n’Bone Man show is in there. 🙂