“Caelynn, I’m sorry. Take a moment. Say your goodbyes.” Day-um. I didn’t see that coming which was obvious as just a few minutes earlier My Daughter Cassandra and I were screaming, “HE PICKED TAYSHIA????” So, she turned out to be the dark horse? Day-um. Caelynn was obviously surprised, too, as all she could think of to say to Cassie was, “It’s 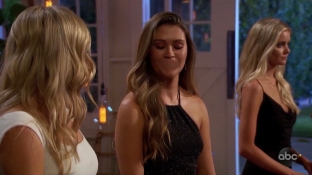 true. Nickelback is my favorite band.” That’s a comment so egregious the producers had no choice but to bleep that [bleep] out. And out she went with the limo warmed up and waiting for her tearful exit. [cue Journey It Could Have Been You]

I must confess that the least interesting episode for me each year are the hometown visits which stand in stark contrast for my enjoyment of the hometown visits near the end on American Idol. There, the final Idolists get parades, parties, keys to the city, days named after them, visits to the local radio station, pep rallies at their old high school and they get to be the ones who put on a concert instead of having some unknown artist show up to do one for them.

On The Bachelor/Bachelorette all we get are the usual skeptical moms, overly protective dads[1] and fake drama like with Tayshia’s dad who was a hard pass on giving his blessing to Colton until his daughter sweet talked him into it. You know that’s fake because I have two daughters and I never let them talk me into anything! Well, except concert tickets. The most expensive ones. On school nights. And buying them concert merch. And dinner before and after the show. Drinks at the show when they got older. But I digress . . .

However, my usual aversion to hometowns was averted by the rather enjoyable etiquette lesson Colton got from Birmingham’s Hannah G. (the “G” is for good) teaching him how to be a proper southern gentleman. Not only that, it was something I’m bougie enough to see myself doing[2] – as opposed to backyard BBQs with a ton of people I don’t know[3], skydiving (Tayshia), or surfing (Cassie) – I also got tipped off from my Crack Research Staff (a friend from Birmingham) about the neighborhood where Colton and Hannah G. (the “G” is for good) would be going.

Next week are the fantasy suite dates during which we will have to suffer through repeated mentions of the thing I refuse to mention this season. Tayshia will have her goodbye moment, right? Right? Colton will get down on one knee to either Cassie or Hannah G. (the “G” is for good). But we know what we’re really waiting for: the explanation of the clip we’ve seen from Week One of Colton jumping over the wall; and The Deliciousness Cattiness of The Women Tell All.

Two nights. Bring it. [cue The Jacksons Can You Feel It]

[1] Or is it overly protective moms and skeptical dads?

[3] And some red drink that was either punch or Kool-Aid. What? No French Rose´?

One thought on “Take Me Home Tonight”