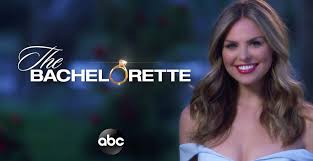 “THIS IS SURE TO BE A SHOCKING AND EMOTIONAL NIGHT. SO SHOCKING, WE JUST COULDN’T WAIT TO SHOW YOU.”

For once, Chris Harrison’s intentional self-deprecation lived up to the hype. We can thank Luke for this. Like every archetypal villain, he had to return for a second time to ultimately be defeated. Surely St. Lukeness can tell us about how the Devil will be crushed a second time after appearing for a while as an angel of light. In this monster’s case, he reemerges with an engagement ring. Self-absorbed much? He really believed he could upend The Bachelorette rules of engagement (see how I did that?) where it’s supposed to be the last two guys who come with a ring. Not any of last four guys who want to. Especially when he had already been banished from the final four.

Hannah B., however, laid down her version of the law. I’m quite sure she had Elle Eyre’s fabulous song Comeback in her head:

When he returns he puts you in a situation
But it’s too late to have that kinda conversation
It’s not your job to show this boy some education, no
Now ain’t it funny how we never seem to work it out

And in one of the great Bachelor franchise moments of all time, Hannah moves the pedestal with the roses in front of where The Lukeness Monster was standing. Get thee behind me Satan! 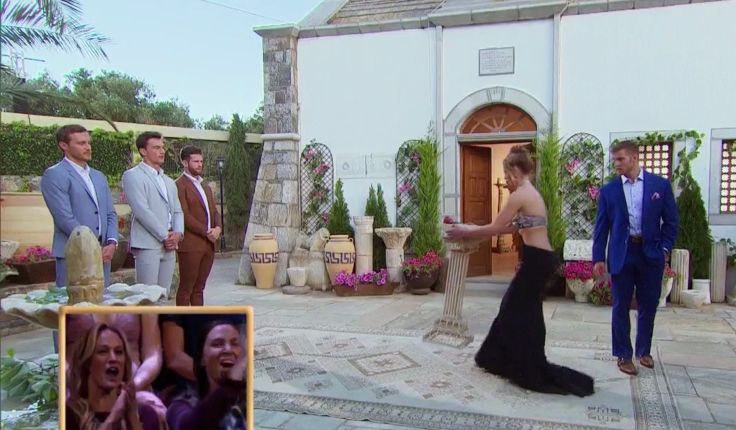 Much masculine drama ensued – clenched fists, veiled threats and Chris Harrison standing cluelessly by. But typical of a classic villain story, it’s the heroine’s job to save the day and finally, the monster is slayed.

They’re all the same, they never learn
So dig their grave, and let that [m-fer] burn . . .

With that business out of the way, Chris Harrison turned our attention to the expected tell-all portion of the program. Since the entire season was about Luke, he was the prominent feature of the tell-all, too. Even after all this time, he is resolute in his narcissism (“I was on a rescue mission for Hannah”), lack of self-awareness and unrepentance – “I wouldn’t change a thing.” 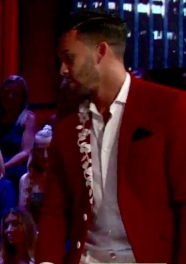 For much of the tell-all until he abruptly walked out without notice, he was basically a punching bag for Chris, Hannah B. and all of the guys, especially Devon, who came out of the back during Luke’s 1-on-1 with Chris Harrison to call BS on something Luke said. I only mention this because I still don’t know who Devon is and his jacket was awful (and made worse by the black pocket square). Of course, part of the fun of the tell-all shows is seeing contestants we don’t remember at all.

By the way, the drinking game was based on Luke saying “clarity” or “let me try to make this clear”. If you played, you were sloshed by the midpoint of the show.

Please tell me the girl with the John Paul Jones tee-shirt who came out of the stands to cut a lock of his hair was a plant. If not, I am deeply embarrassed for her. Actually, I’m embarrassed for her, anyway. JPJ seemed to dominate the non-Luke portions of the tell-all which likely means he’s going to be an important part of Paradise. He also gets to be Instagram famous now, too.

Mike was the other guy who got lots of non-Luke time. Mike filled his role in the seasonal Bachelor franchise trope of the nice guy/girl who falls super hard but you know is going to get an early heartbreak. First Bachelor POC?

And then there was Hannah’s huge confession early in the show and apology late in the show for forcing us to endure the Monster. It was consistent with her endearing relatability to admit to being undeserving of her role; her insecurity with that; connecting with the first guy who stopped her from feeling that way; fighting through the toxicity of that relationship and her self-doubts; and validating that the guys – and a watching nation – were right about being right about the wrong guy. That was good stuff.

And then we were left with the cliffhanger which I was happy about. There was no good way to segue from the Luke-Hannah B. rose ceremony drama so the producers wisely didn’t even try. We can start fresh next week to see how – if? – Hannah B. decides amongst her three guys, and oh, boy, the previews look juicy. I will be dealing with work/travel so please be patient with me.